Our effort to cook from a different cookbook every week this year continues. Last night we went to Terry Hope Romero’s Viva Vegan for this Colombian-style Red Beans recipe. It occurred to me that we need to keep this in mind for the summer when we’re getting lots of onions and peppers from our CSA. This dish (and many other Latin recipes) starts with a sofrito, which consists of onions, peppers and garlic cooked long and slow in lots of oil. In addition to the sofrito, these beans were seasoned with cumin, paprika and oregano, and also included a diced plantain and a shredded carrot. Then they were simmered in veggie broth and served with brown rice with some broccoli on the side. I also doused mine with plenty of hot sauce and garnished with fresh oregano. 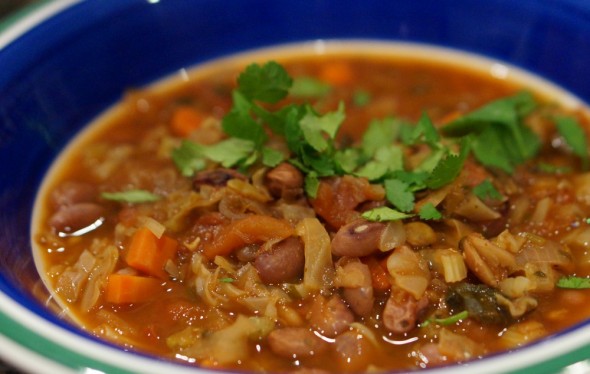 Here’s a recipe that goes back a very long time but we still make it on occasion – vegetarian chili from Mitch’s Tavern in Raleigh, NC. Tonight I experimented with making it in the pressure cooker. Check out our post on our previous blog for the original recipe (or get it straight from the Mitch’s Tavern site). If you have a pressure cooker it’s even easier. Here’s the variation I made tonight. I just put all these ingredients into our Instant Pot and cooked on high pressure for 20 minutes.

The chili was fabulous and so was the appetizer. We just got a good deal on a big bunch of plantains and I made tostones for the first time. I’ve fried ripe plantains many times before but I’ve never used them green. They’re less sweet this way but equally delicious. I used the recipe from Terry Hope Romero’s Vegan Eats World, but if you don’t have that one just Google tostones and you’ll find many recipes.