While American Vegan Kitchen by Tamasin Noyes is not among our most used cookbooks, it does have a lot of great comfort-food recipes. Like this tater tot pie. It’s like a shepherd’s pie but instead of mashed potatoes it’s topped with tater tots. How fun! We don’t often use the texturized vegetable protein called for in the recipe so we used lentils instead and it came out fabulous. We used store-bought tater tots but definitely want to try this again with homemade tots. 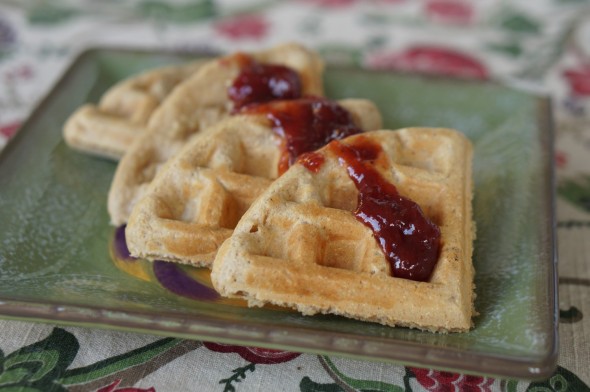 There are many great breakfast/brunch recipes in Vegan Brunch and it’s certainly our go-to book for waffle recipes (and now it’s added to our 52 cookbooks list). The Sneaky Dad’s Waffles recipe that I posted about long ago (and that I still make regularly for our kids) is a heavily adapted version of the Gingerbread Waffles from Vegan Brunch. Another favorite recipe is for these Peanut Butter Waffles (recipe posted here). They’re good with a drizzle of maple syrup or all manner of other toppings but sometimes I just want some PB&J action and I have my peanut butter waffles spread with strawberry jam. 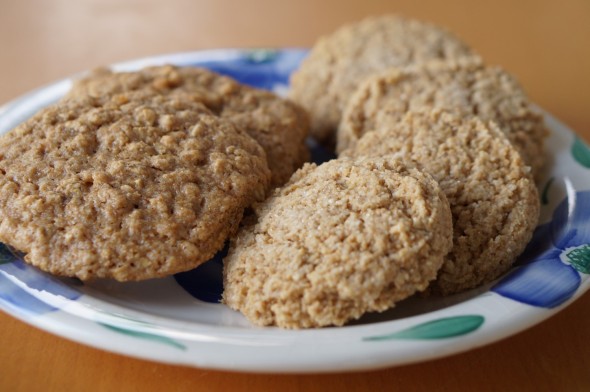 When we wanted to make some snacks to bring on a recent trip it was a good excuse to check off two more books from our 52 cookbooks list. There are many great recipes in both of these books (and many great cookie recipes in other books) but the Coconut-Lime Cookies from Vive le Vegan! and Big Gigantoid Crunchy Peanut Butter-Oatmeal Cookies from Vegan with a Vengeance are the cookies we make most often. The peanut butter-oatmeal cookies are filling and substantial while the coconut-lime cookies are lighter and we just love the flavor combination. You can’t go wrong with either one and especially not with both!