Wow, it’s February and we’re just posting about Christmas dinner! These last few months have been busy but it’s time to catch up a bit with this blog. Before Christmas I saw that Isa posted her recipe for Sweet & Smoky Glazed Tofu Ham from The Superfun Times Vegan Holiday Cookbook. We decided to make it for Christmas dinner and it was fabulous. On the side we had roasted brussels sprouts, whipped sweet potatoes and bananas and cranberry sauce. The sweet potato recipe was something from Tyler Florence that we did for Thanksgiving long ago and enjoyed. The recipe calls for honey and butter but it’s easily veganized by using agave and Earth Balance. This time we cut way back on both the sweetener and the fat and it was still great. 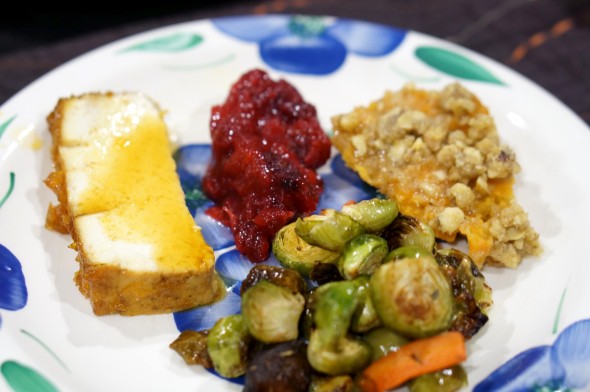 On another note, we didn’t accomplish our goal of using 52 different cookbooks last year but we decided to keep plowing ahead to see if we can get through all 52 by the end of this year. We’ve since purchased the new Isa book and it’s added to our list (we also made the Cheeseburger Pizza for the Super Bowl and it was awesome) and we have a couple others to add. Another book we’ve added to our collection was just released recently – Kathy Hester’s The Ultimate Vegan Cookbook for Your Instant Pot. We love our Instant Pot and this book has been a good addition to our ever growing cookbook shelf. So far we’ve made the Jambalaya (pictured below), which was quick, easy and tasty, and also the Southern Breakfast, which is grits and a tofu scramble made in the Instant Pot at the same time. We decided we like a tofu scramble made on the stovetop better but the grits were awesome. Despite living in the South we don’t eat grits often but this recipe will change that. We’ve already made grits multiple times since then.

Now step into the way, way back machine for another cookbook we just added to the list. The Horn of the Moon Cookbook was one of the first vegetarian cookbooks we ever bought (there were quite literally only about two vegan cookbooks available at that time) and we don’t use it much anymore because it’s fairly egg and dairy heavy but the Cashew French Toast recipe (pictured below) is one we keep coming back to. It was especially good now that we have a Vitamix because the batter whipped up super creamy. If you’ve read this far, congratulations! Here’s a bonus recipe: mix 1 1/2 cups non-dairy milk with 1/2 cup cashews, 2 Tbs. sunflower seeds, 2 Tbs. sesame seeds and 1/4 tsp. vanilla extract in a blender or food processor. Pour over some thick slices of bread and cook like you would French toast.

Over the summer the New York Times published a survey looking at nutritionists’ vs. public perceptions of healthy foods. They found that granola was one of the foods that generally have a public perception of being healthy but that nutritionists ranked as unhealthy. I think the main reason for this view of granola as unhealthy is that most commercial versions are packed with sugar. That’s one reason I make my own granola and don’t buy commercial varieties (it’s also really expensive to buy versus making it yourself).

I first started making my own granola many years ago after seeing Alton Brown make this recipe on Good Eats. I came to realize though that this recipe has a ton of sugar just like most commercial granola and gradually started cutting back on the sugar. My current recipe has six times less sugar than the original one and I honestly like it better. Here’s a simple recipe if you want to give it a try yourself.

Just mix all these ingredients together well in a large bowl then spread on a baking sheet. Bake in a 300 degree oven for 30 minutes then turn the oven off and leave the granola in for another 15 minutes. That’s it! Super easy and healthy too!

We hope everyone had a wonderful Thanksgiving! We had a fairly typical Thanksgiving meal this year, with the centerpiece being a puff pastry vegetable pie layered with kale, butternut squash, and mushrooms. The puff pastry was a modified version of this Emeril recipe, using Earth Balance instead of butter. We also had roasted potatoes and beets (the 3-year-old loves beets), steamed green beans and cranberry sauce. Sometimes we do a more complex cranberry sauce recipe, adding other fruit or spices but this year we kept it super simple. It perplexes me why people buy cranberry sauce in a can because if you buy a package of fresh cranberries there’s usually a recipe right on the bag and it couldn’t be simpler: toss the fresh cranberries in a saucepan with water and sugar and simmer until the cranberries break down and start to thicken.

To wrap up the meal we had a pumpkin pie. Though it wasn’t actually made with pumpkin but rather with butternut squash. We had a huge volunteer butternut squash patch sprout from our garden this year and we still have quite a few of the squash stored in our basement. It’s fairly interchangeable with pumkin so keep that in mind next time you want to make pumpkin pie! 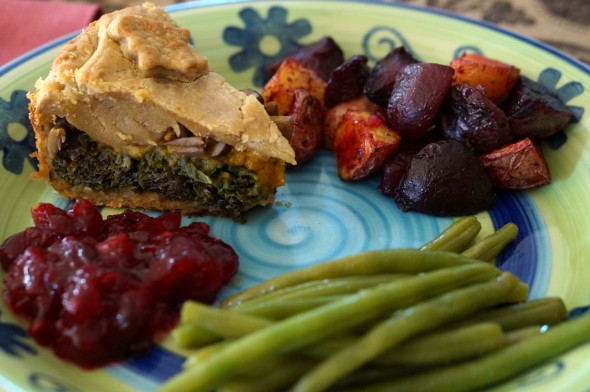 A little bit of everything on the plate 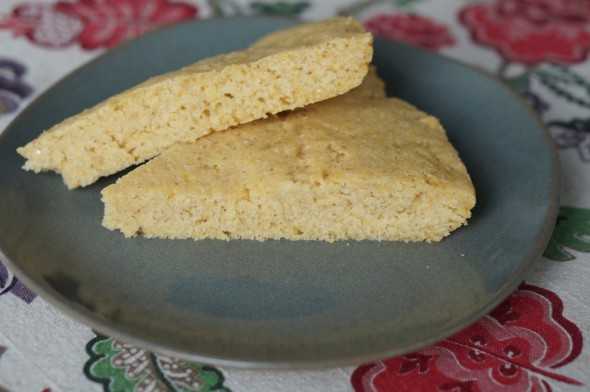 Adding to the 52 cookbooks list. First up, cornbread from Peter Berley’s The Modern Vegetarian Kitchen. I posted my adapted version of his recipe already and often make this when we have chili for dinner.

Next up, Energy Bites from Robin Robertson’s Quick Fix Vegan. This is the very last recipe in this book and it’s a good one. They’ve got cashews, sunflower seeds, dates, cranberries and peanut butter (which I substituted for the tahini). The kids ate them at first and then lost interest but I thought they were great right through to the last one!

Since we’re all about making things from scratch, we’ve really been enjoying The Homemade Vegan Pantry by Miyoko Schinner. And since we got a soy milk maker a couple years ago we’ve been making soy milk regularly and then wondering what to do with the okara, which is the leftover pulp from making soy milk. We use it for baking and granola but I was happy to find a few recipes in The Homemade Vegan Pantry that include okara, like these San Francisco Fab Cakes. They’re sort of a mock crab cake and they’re really delicious! And our 52 cookbooks list is finally growing again. 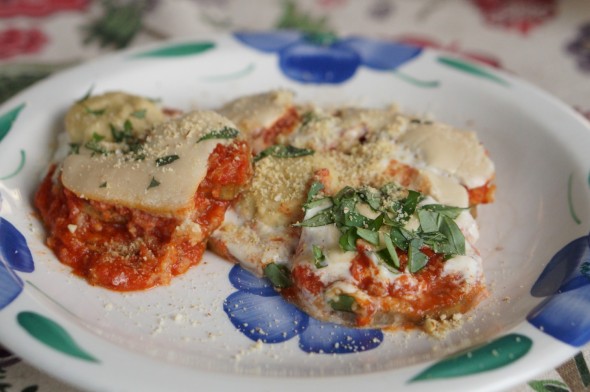 We’ve been getting plenty of eggplant from our CSA and found that this Eggplant Parmesan recipe from Chloe’s Vegan Italian Kitchen was super easy to make and really delicious. Rather than breading and frying the eggplant, it’s broiled and then layered with tomato sauce, bread crumbs and a faux mozzarella sauce made from cashews. The only issue I had with the recipe was that the cooking times seemed too short. The eggplant was pretty toothsome at first but after covering it and cooking it longer it was melt-in-your-mouth perfect. Hopefully we’ll have a chance to make it again before the eggplant is gone for the season! 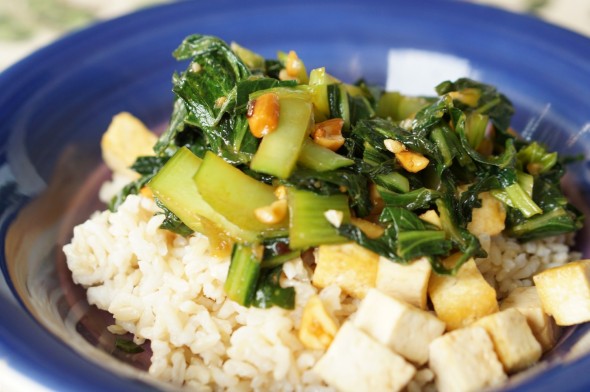 Here’s some digging into the cookbook archive to catch up a bit on the 52 cookbooks effort. First up, something we did with the bok choy we’ve been getting from our CSA.

We had this over rice with some fried tofu and it was fabulous.

No picture of this one but it was a nice way to use up a green cabbage. Despite the name this book is not particularly vegan-friendly. Case in point: this cabbage recipe calls for duck fat. Well, it was easy to substitute Earth Balance.

Cook onion in fat, add cabbage, vinegar, bay leaf, salt & pepper and water. Cover and simmer for 20 minutes. Grate the apple, add it to the pan and cook another 5 minutes. 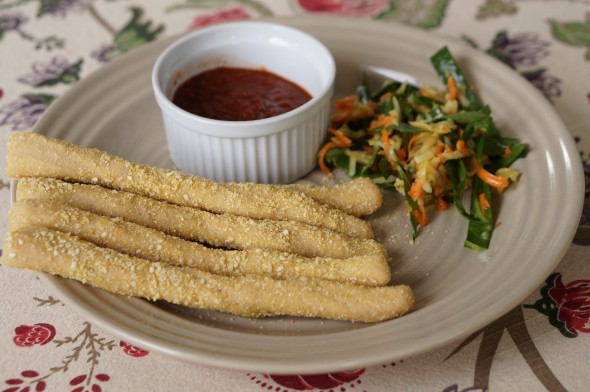 The tomato sauce has kale, red pepper, and carrots so I figured this was a good way to get the kids to eat some extra vegetables. The bread sticks were rolled in a sesame seed/nutritional yeast mixture, also upping the healthiness a bit. You could do this with any bread recipe and any pasta sauce recipe. I thought it would be fun for the kids and though they weren’t totally sold on it, I thought it was fun.

veganscratch
Create a free website or blog at WordPress.com.